It is supposed that our most ancient cave dwelling predecessors told supernatural cautionary tales of adventure that included encounters with fantastic creatures.

Their flickering fires casting out-sized, ominous, and at times, grotesque shadows on the wall amplified the sense of dread and danger. Add the slow beating of a drum mimicking the ever increasing beating of hearts, mixing with the mysterious sounds of nature lurking in the darkness and you begin to see the primeval recipe that Manual Cinema has tapped into in the telling of their version of Mary Shelley’s “Frankenstein.”

Manual Cinema is a singular theatrical experience that has elements of street theater and silent film. The company mixes live action, silhouettes, puppets, shadow puppetry, masks, video, slide projection and all manner of theatrical techniques, ancient and modern to create a captivating monochromatic video mash-up, reminiscent of a nickelodeon feature, assembled and projected on stage before your eyes.

Mary Shelley is considered to be one of the great novelists of the 19th century and this particular homage to the one hundredth anniversary of her classic Gothic masterpiece is in good hands. 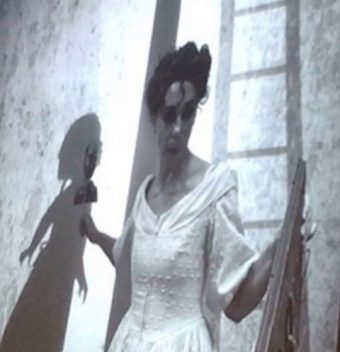 Act One provides some biographical insight of the author including particular incidents in her life that no doubt influenced her writing of the story that would come to define her career.

The well-known challenge of who can write the best ghost story that she proffers to her husband Percy and his friend Lord Byron, both accomplished writers in their own right, sets the stage for the telling of the tale in Act Two.

In this version, the obsessive Victor Frankenstein secretly toils in the clock tower of his university to devise a way to reanimate the dead, finally finding success after seemingly endless attempts and combinations of chemistry, physiology and electricity that culminate in the emergence of “the Creature.”

Neither human nor not human, neither dead nor alive, the Creature is the embodiment of anguish, loneliness and unhappiness, desiring only to be accepted and embraced by the people it encounters.

The roles of Mary Shelley and Victor Frankenstein are both played by the visually expressive Sarah Fornace.  The rest of the ensemble, Julia VanArsdale Miller, Leah Casey, Sara Sawicki and Myra Su play the other various parts while also manipulating puppets and attending to myriad technology that includes an array of overhead projectors and video cameras in addition to onstage costume, wig and mask changes.

This is a unique theatrical experience that should not be missed.