Following a couple of years of virtual and shortened versions of Taste of Chicago, Mayor Lori Lightfoot and the city’s Department of Cultural Affairs and Special Events (DCASE) announced May 21, 2022, some surprising plural Tastes and other changes.

Taste will first sharpen appetites for a day in three neighborhoods: Austin, Pullman and Little Village in June before moving to Grant Park for three days in July.

The neighborhood expansion is a double-barrel initiative for Taste of Chicago which began in 1980. It’s a chance for Taste goers to get to know other areas of the city and for food vendors to bring their “tastes” to a neighborhood.

Grant Park is Friday through Sunday, July 8-10, 11 a.m. to 9 p.m. at Buckingham Fountain near Jackson and Columbus. There are 32 food vendors, two stages and SummerDance. For the Main Stage and Goose Island Stage plus the SummerDance times and vendors visit Taste Grant Park.

Another change is that no food tickets will be sold.  Food vendors will take cash and credit cards.

All events are free.

Yes, the City of Chicago has reopened. However, look for your favorite festivals at different times in different formats and at different places. There are more events and new celebrations across the city’s many neighborhoods in 2021.

Because some noted annual fests as Blues, Jazz and Gospel are arranged way ahead of performance dates but COVID interfered, plan on attending each of them in a three-hour, early-evening version this fall. As part of the city’s new “In Tune” program, they all will be free and run from 5:30 to 8:30 p.m. at Millennium Park’s Jay Pritzker Pavilion in September 2021.

Gospel is Sept. 3.  Hosted by Jonathan McReynolds and Inspiration 1390’s Sonya Blakely and Deandre Paterson, it will include La Shon Brown, the Carson Sisters, Nicole Harris, Illiana Torres and the Tommies Reunion Choir.

Jazz is Sept. 4. Presented by the Jazz Institute of Chicago, it features Ari Brown, Marquis Hill and Lizz Wright.

Work off the Taste of Chicago treats after July 11. The celebration of Chicago dishes and restaurants starts July 7 but instead of everything happening in Grant Park  it will be a week of pop-up food from nearly 40 eateries and take place in neighborhood markets. Plus there are cooking demos, music and community meals with local nonprofit organizations.

The event culminates July 11 from noon to 3 p.m. with women restaurateurs in Millennium Park.

The city’s new programs include  “Chicago Presents” community events; a nine-part House City  series in the neighborhoods that helped create the music genre; two Latinx and World Music celebrations; two  films  and more just-announced special events at the Jay Pritzker Pavilion; and a mash-up of public art and dance at Lurie Garden in Millennium Park.

Most of the events that bring thousands of residents and tourists downtown Chicago such as Lollapalooza and the Air and Water Show have been canceled for what will be remembered as the summer of COVID-19.

But with summer there also comes farmers markets, a different way to enjoy Taste of Chicago and where to find entertainment options.

Some outdoor markets have opened in the suburbs under strict guidelines including the Evanston Farmers Market.

In Chicago, a few are expected to open in June and July. However, most have curb-side or other pickup arrangements through a What’sGood app. For farmers market news visit Chicago City Markets.

Green City Market opens its Lincoln Park location June 13 from 7 a.m. to 1 p.m. The market will only be open on Saturdays. The 7-8 a.m. time is for COVID vulnerable populations. GCM in the West Loop opens in Mary Bartelme Park on June 20 from 8 a.m. to 1 p.m.

See Shopper guidelines because they will ensure the markets can stay open. They include how to move swiftly through the market, wearing face coverings, keeping social distances and not touching items.

For more information on the market you usually use visit and how and where to find its goods visit Chicago farmers market collective.

Under the title Do Stuff at Home, the Chicago’s Department of Cultural Affairs and Special Events suggests watching local online programs that range from “The Quarantine Concerts that can be seen today, June 11 through June 30 and First Folio’s “Cymbeline: A Folk Musical” available through June 14 to “Keeping Pride Alive” on June 28. To see the schedule go to DO312.

Hey Chicago foodies, this weekend is about putting off the diet until Monday because there’s a yummy snack o scarf down or a different cuisine  to try out in the neighborhoods and downtown.

You know this is the biggie, the one that requires good walking shoes and lots of hollow-leg room to visit the dozens of restaurant booths lining Grant Park. Taste runs July 10-14. Hours are Wednesday – Friday: 11 a.m. – 9 p.m., Saturday and Sunday: 10 a.m. – 9 p.m. Admission is free but you have to buy tickets to use at the booths to get any food and beverages.

Along with the regular booths check out the food trucks, pop-up restaurants and chef demos. Also stop by the Petrillo Music Shell to hear who’s entertaining the day you’re there.

Some streets will be closed (or clogged with traffic) behind the Art Institute and around Jackson for Taste so take public transportation.

It’s about really good barbecue. Well, it’s also about good beer. And of course, it’s a about great country music.

What you need to know is that this year, Windy City Smokeout has moved from River North to the United Center Parking Lot at 1901 w. Madison St., that the dates are July 12 – 13, 2019 and that gates open at 2 p.m. Friday and at noon on Saturday and Sunday.

The annual festival benefits and is at the 92-year-old St. Andrew’s Greek Orthodox Church on Chicago’s Northside in the Edgewater neighborhood. Celebrating Helenic heritage, it features Greek food, music, dancing and band plus has artisans and kids’ activities. 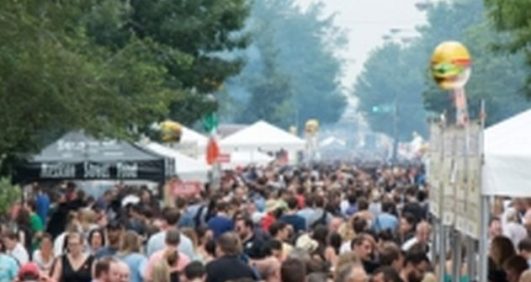 More than a block party but just as friendly is Roscoe Village’s Chamber of Commerce’s annual Burger Fest. The place to go for great burgers, music on two stages and artisan booths is 2000 W. Belmont at Damen Avenue, July 13-14 from 11 a.m. to 10 p.m. B TW you get to vote on Chicago’s Best Burger.

Here are two places-to-go ideas for early May plus one for July. Chicago’s Riverwalk opens soon followed by Andersonville’s Annual Wine Walk. Then, skipping June which we’ll look at later, there is new info on Taste of Chicago.

Yes it’s early to put Taste of Chicago on the calendar but the city just had a preview Taste and it was GOOD.

Who knew that a Korean restaurant would pair well with tacos. David Choy of Seoul Taco, did. He has figured out that two trends, Korean flavors and a taco-styled sandwich would be poplar. His version is so good it is now a chain with food trucks in St. Louis and a place near the Loop and in Hyde Park.

Seoul Taco was where the city held a Taste preview  this week. Mayor Rahm Emanuel  pointed out that though Taste had gone through a rough period a few years ago it was again drawing crowds and attracting many more of the city’s good restaurants including several ethnic places that Chicago’s foodie will want to try. “Taste is back,” he said.

“As the culinary capital of the world, the Taste of Chicago will give residents and visitors alike the opportunity to sample some of the greatest foods this city has to offer,” said Mayor Emanuel. “Since its inception, the Taste of Chicago has become a summertime staple and this year’s lineup of world-renowned restaurants, food trucks and pop-ups will be even more vibrant and diverse than ever before.”

To answer questions asked by folks who knew I went to the preview, yes it will be in Grant Park for five days, yes it will be the second week of July going from July 10 to 14 (2019), and yes, there will be a lot more new eateries: 11 five-day participants, 17 pop-ups serving one or two days and 9 food trucks. Adding the newbies to the roster equals 82 eateries at Taste.

Seoul Taco will be going from a pop-up the last two years to a five-day eatery this year. BTW, along with Seoul Taco, newbies Luellas Gospel Bird and Gordo’s Homemade Ice Cream Bars had yummy samples at the preview.

Other big news is that DoorDash, yeah that company Millennials have found to be a convenient way to do dinner at home, will be a new sponsor. In addition, Some chefs will be concentrating on Taste’s specialty of the day ranging from mac’n cheese to spicy/hot. But one day will bow to the healthy-eating trend.

Chicago will celebrate its spring re-opening with walking tours led by the Chicago Architecture Center, Fishing at the Jetty led by the Chicago Park District, some Year of Chicago Theatre programs and Art on the Mart,  May 13-19. Details will soon be up at ChicagoRiverwalk.us. Or just go down there to walk along the river, see art installations and dine at City Winery.

Sip your way through 28 Andersonville businesses on the neighborhoods’  Chamber of Commerce’s annual Wine Walk, May 19 from 3-6 p.m. Tickets are $35 per person in advance and $40 week Tickets available online

Tickets to Andersonville Wine Walk include admission, wine tastings, and a one of a kind commemorative wine glass. Check in for the Wine Walk will begin at 1:00 p.m. on  May 19 at the Swedish American Museum’s new storefront located at 5217 N Clark.

In Chicago, food and music just go together. Ergo, no surprise that two big food festivals also feature bands and two mega music festivals include food vendors. Even a free summer jazz series is steps away from a slew of food counters and restaurants.

Diet after Labor Day. Head over to Grant Park July 11-15, 2018, to taste more than 70 restaurant favorites that have made Chicago  a foodie town. The festival is free but tasting is by tickets. They are sold in strips of 14 for $10 (expect a $3 charge for Taste amenities). Also available are 1-6 tickets for smaller “Taste of Portions” from each food vendor. Look for pop-up restaurants, food trucks and five-day regular booths. New this year is the Taste Oasis tent, a cool AC place in the park’s Butler Field to hang out and taste. Taste Oasis is $50 for the day you choose.

Get a discount by visiting a participating restaurant before Taste begins.. See Taste of Chicago discount info. For hours, map and guides to all the Taste-Of activities visit City of Chicago/Taste update.

Great a great mix of country music and food at the Windy City Smokeout,  July 13-15, 2018. The event stretches between Grand Avenue and the Chicago River. What to expect: barbeque flavors and styles from all over including Nashville and Chicago plus such folks as Renee Blair and Brett Young. For tickets, hours and other info go to Windy City Smokeout.