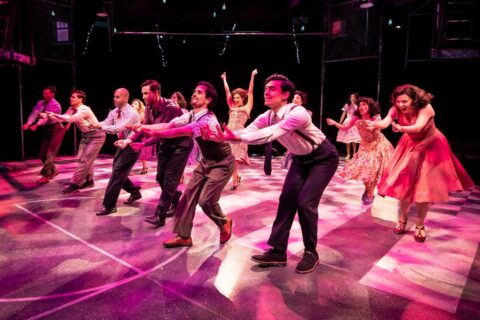 With audiences now used to observing mask mandates and bringing their vax cards, theaters are going ahead with their winter show schedules.

There is a wide selection of winter shows, some of which you might miss in 2022, depending on your usual theater subscriptions and play going habits, So, here are a half-dozen to add to your list with some theaters in Chicago and some in the suburbs.

“Groundhog Day: The Musical” opens at Paramount Theatre at 23 E. Galena Blvd, Aurora on Jan. 26. Visit Paramount Theatre.  Based on the Bill Murray comedy, the book was written by Danny Rubin with music and lyrics by Tim Minchin.

If you go to see “West Side Story,” now at the Lyric Opera through June 2, 2019, you are likely to think about how culture clashes have changed or not since Leonard Bernstein wrote the show’s dramatically descriptive music, Stephen Sondheim did the very memorable lyrics, Arthur Laurents penned the book based on William Shakespeare’s “Romeo and Juliet” and Jerome Robbins directed and choreographed it.

When West Side Story opened as a Broadway musical in 1957 it received six Tony nominations including Best Musical but a feel good show, “Music Man,” won the Tony Award for Best Musical. “West Side Story” was not meant to make audiences happy. Even the show’s single funny scene/song “Gee, Officer Krupke” sung by the Jets pinpoints societal problems.

Anyone who reads Shakespeare’s tragedies, knows the Bard is very good at portraying motivations and clashes.

If you know your Shakespeare, you will find some similarities between the “Romeo and Juliet “ of the 1590’s and Broadway musical of the 1950s.

END_OF_DOCUMENT_TOKEN_TO_BE_REPLACED

Leonard Bernstein’s genius for capturing the soul of America in everything from orchestral works, opera and religious tributes to musicals, ballets, choral pieces and songs for events, is being celebrated at venues throughout the world in honor of his 100th birthday.

What the Lyric Opera of Chicago is doing promises to be exceptional.

They and Broadway star Kate Baldwin plus other artists will sing numbers from shows Bernstein did such as “West Side Story,” “Candide,” “Peter Pan,” “Wonderful Town” and “White House Cantata” (Originally titled “1600 Pennsylvania Avenue” written with Alan Jay Lerner) and other songs.

There might be a song from “Songfest,” commissioned to celebrate America’s 1976 Bicentennial. Based on poems, it could be “To What You Said” (Walt Whitman). It is about love for another time and conflicted sexuality. Another program possibility is “So Pretty,” a 1968 anti-war song, Bernstein wrote with lyrics by Betty Comden and Adolph Green. Composed for a Broadway for Peace fundraiser at Lincoln Center, it was sung by Barbra Streisand.

“I think it will be revelatory,” said Lyric dramaturg Roger Pines during a recent interview.

“We have Nathan Gunn so we can do “Captain Hook’s Soliloquy,” It’s a tour de force. He as the right voice for it,” said Pines. “It was not sung in the original Broadway show (April, 24 1950) because Boris Karloff was Captain Hook (and also George Darling).

(Note: Bernstein wrote the music and lyrics as a complete score but only a few of the songs were included in the original staging, supposedly because of the leads’ limited musical range.)

The first half of Lyric’s program will be the opera which is sung in English. Pines notes that even though it was written and staged in the early 1950s, “Tahiti’s” marital communication problems are more universal then applicable to one time period.

“Couples now can relate to the problems in their own relationship,” Pines said. He also thought people would appreciate Graham’s aria in her analyst’s office and the one she sings after leaving a horrible movie. “It’s comic,” he said.

As to the second half, Pines said it was important to introduce the wide variety of Bernstein’s music and how it was reflecting events. “Bernstein was so multi-faceted we do not have time to explore every side. But I think it is a good way to see that his music is extremely varied, and its quality.”