COVID protocols are making it possible to hold events at the Lyric Opera, Symphony Center and North Shore Center for the Performing Arts. So, when winter needs a mood changer, try Verdi, jazz, Debussy or Music of the Baroque.

From jazz and the CSO At the Movies (Casablanca) and from Prokofiev to Rachmaninov, there is a lot going on in different musical genres at the CSO”s Orchestra Hall in February, 2022. Check out the calendar at Symphony Center concert listings.

Music of the Baroque

“The Chevalier,” a concert drama about the first major Black classical composer, Joseph Bologne, (Chevalier de Saint-Georges), will be at the North Shore Center for the Performing Arts, 9501 Skokie Blvd., Skokie, Feb. 19 at 7:30 p.m.  Written and directed by Bill Barclasy with music by Joseph Bologne, the concert drama was commissioned by the Boston Symphony Orchestra in 2018. For tickets and mor information visit North Shore Center/event.

Chicago theatres and entertainment venues have a terrific line-up of shows for the 2017-18 season. Now is a good time to plan what to see with season tickets or dropping hints for birthday or holiday presents.

Don’t just consider plays. There’s also one-and two-nighters of top entertainers at a couple of venues. With so many places to go for a night out the Chicago theatre scene has to be broken into different areas. Not everything to see is downtown or Near North. So, try some of the theatres and other venues north of the city.

END_OF_DOCUMENT_TOKEN_TO_BE_REPLACED

Philip Glass has fictionalized Walt Disney’s final days as an opera. Composed of dreams and nightmares revolving around the fate of his kingdom and legacy, it includes recognizable people. The Chicago Opera Theater is performing the Chicago premiere of ‘The Perfect American’ at the Harris Theater for Music and Dance Saturday at 7:30 p.m. and Sunday at 3 p.m. The Harris is in Millennium Park at 205 E. Randolph Drive, Chicago. For tickets and other information call (312) 334 -7777 or visit Harris.

The Lyric Opera of Chicago is bringing the famed violinist to the city for one performance. It is 3 p.m. Sunday at the Civic Opera House. Accompanied by pianist Rohan De Silva,  Perlman’s program includes Vivaldi’s Sonata in A Major for Violin and Continuo, Beethoven’s Sonata for Violin and Piano in F Major, Schumann’s Fantasiestuck, and Ravel’s Sonata for Violin and Piano No. 2 in G Major. The Civic Opera House is at 20 N. Wacker Drive, Chicago. For tickets and other information call (312) 827-5600 or visit Lyric.

‘Odysseo,’ a wondrous equestrian production visiting Chicago from Canada, that also includes acrobatics and aerial performances, has been extend through May 7. Drivers who have gone by Soldier Field or the Museum Campus will have seen the huge white tent where ‘Odysseo’ takes place. But what they might not know unless they’ve attended a show is that it has a 17,500 square foot stage that includes a three-story-high hill and other natural elements. The staging makes attendees feel as if they have been transported to the land where these horses cavort instead of the other way around. Entry is through the parking gates on East 18th Drive. For tickets and other information call (866) 999-8111 or visit Cavalia.

The Joffrey Ballet is doing ‘Global Visionaries,’ a tribute to several choreographers that includes the world  premiere of a piece by Swedish choreographer Alexander Ekman and the Chicago premier of a ballet by Russian choreographer Yuri Possokhov. Also showcased is Dutch choreographer Annabelle Lopez Ochoa’s ‘Mammatus. The program is at the  Auditorium Theatre 50 E. Congress Parkway, Chicago. For tickets and other information call (312) 341-2310 or visit Auditorium Theatre. 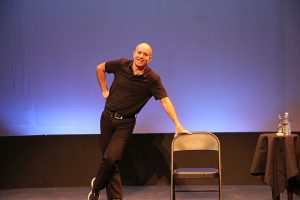 Waiting tables becomes a comedy source in “My Son the Waiter: A Jewish Tragedy”

Brad Zimmerman, a stand-up comedian who has opened for Joan Rivers and George Carlin, regales audiences with tales of waiter-customer encounters (“Lady, is anything all right?”) in his one-man show, “My Son the Waiter: A Jewish Tragedy.” He also throws in a lot of Jewish-mother imposed guilt and his own lack of ambition.